Featuring a budding cultural scene and attractive countryside, Whitchurch-Stouffville is the third fastest growing municipality in Canada, and offers real estate options in a variety of styles and price points.

Whitchurch-Stouffville, about 50km north of downtown Toronto, is the third fastest-growing municipality in Canada. The Town of Whitchurch-Stouffville is made up of several communities, as well as countryside, including Stouffville proper, Ballantrae, Bethesda, Gormley, Lincolnville, Musselman's Lake, Pine Orchard and more.

This makes for a diverse real estate market and experience ideal for almost every type of sensibility. Whitchurch-Stouffville has its own budding cultural scene, including the annual Strawberry Festival. There are also tons of unique amenities nearby and the city and rest of York Region is a mere car ride away.

The average cost of purchasing a house in Whitchurch-Stouffville is approximately $919,683 (YTD 2021) though this number can fluctuate greatly depending on the community and housing type you're looking for. 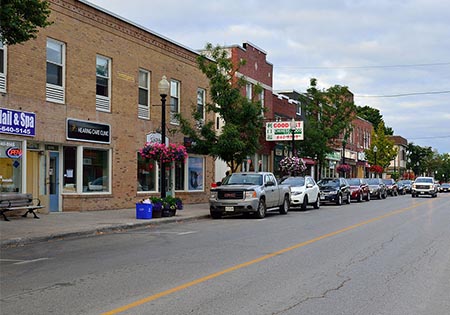 Typically, most buyers will be able to find a comfortable and spacious home within their budget and are likely to get more for their dollar than communities to the south.

Whitchurch–Stouffville (2006 population 24,390; June 2011 estimate 38,650) is a municipality in the Greater Toronto Area of Ontario, Canada, approximately 14 kilometres north of the City of Toronto. It is 206.74 square kilometers in size, and located in the mid-eastern area of the Regional Municipality of York on the ecologically sensitive Oak Ridges Moraine.

Its motto is "country close to the city". The oldest human artifacts found in Whitchurch Township date back to 1500 BC and were found in the hamlet of Ringwood (now part of urban Stouffville).Prior to the arrival of Europeans, two Native trails crossed through what is today Whitchurch–Stouffville.

The Vandorf Trail ran from the source waters of the Rouge River to Newmarket, across the heights of the hamlet of Vandorf, and the Rouge Trail ran along the Rouge River and northwest from Musselman Lake; both were part of the aboriginal and Coureur des bois trail system leading through dense forests from Lake Ontario to Lake Simcoe.

The territory was the site of several Native villages, including Iroquois settlements around Preston Lake,Vandorf,and Musselman Lake.In 2003, a large 16th century Huron village was discovered in Stouffville during land development; approximately 2000 people once inhabited the site (Mantle Site), which included a palisade and more than 70 longhouses, yielding tens of thousands of artifacts.

Other significant late precontact Huron village sites have been located to the south-east (the Draper Site on the Pickering Airport lands) and to the north-west of urban Stouffville (the Ratcliff or Baker Hill Site on Ontario Highway 48, and the Old Fort or Aurora Site on Kennedy Road). The western end of Whitchurch and Markham Townships was purchased by the British crown from the Mississaugas of the New Credit First Nation in 1787 as part of the Toronto Purchase.

Whitchurch Township was created in 1792 as one of ten townships in York County. It was named in honour of the village of Whitchurch, Herefordshire in England, where Elizabeth Simcoe (wife of Upper Canada Lieutenant Governor Sir John Graves Simcoe), was born. The first European settlements in Whitchurch Township were established in the 1790s, though Whitchurch and large areas of southern Ontario were only ceded by the south-Central Ontario Mississaugas in 1923.

Between 1800 and 1802, John Stegman completed a survey of the township which created a system of land concessions. This allowed for the organized distribution of land to settlers, with each concession containing five, 200-acre lots.

This layout remains visible today, as the road network in the area reflects the locations of the boundaries between concession blocks. Many of the first settlements in Whitchurch Township were developed at the intersections of main roads throughout the township and /or near streams where mills could built to process the timber cleared from the land.

Stouffersville was one such hamlet that grew around the saw and grist mills of Abraham Stouffer, a Mennonite who with his wife Elizabeth Reesor Stouffer came from Chambersburg, Pennsylvania in 1804, and acquired 600 acres of land. In 1877, Stouffville became an incorporated village.

Stouffville's growth was aided by the establishment of the Toronto and Nipissing Railway, built in 1871, which connected Stouffville and Uxbridge with Toronto.

In recent years, Whitchurch-Stouffville has revitalized its arts and cultural scene within the community. It's arts and entertainment centre—The Lebovic Centre for Arts and Entertainment—opened its doors in 2009 and local artists can show in the Latcham Gallery or get involved in the annual autumn Studio Tour.