It's a great time to buy in Newmarket, as this small town is growing quickly, both economically and culturally. Real estate varies significantly in terms of size, housing type and cost – there's something for everyone!

With the charm of a small town and convenient amenities, Newmarket is appealing to individuals, families, and businesses. According to the 2016 Census, the population of Newmarket is approximately 85,000 inhabitants, making it the perfect-sized town.

Real estate in Newmarket is suited to any buyer or seller with commercial and residential properties ranging in size, housing type and cost.

Ideally located between Highway 404 and Highway 400, the town sits halfway between Barrie and Toronto meaning no matter where you need to be you can get there quickly from Newmarket. 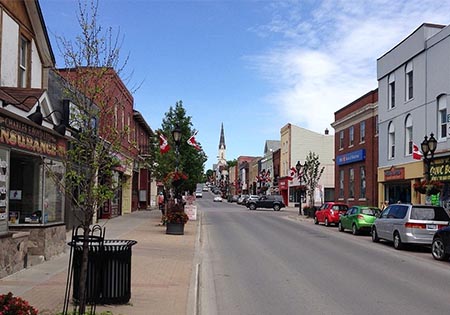 John Graves Simcoe travelled the trail through Newmarket and along the way decided to start construction along Yonge Street in 1795, starting from Toronto (then York) and ending at Holland Landing, north of Newmarket. A Quaker settlement took its roots in Newmarket when in June, 1800, Timothy Rogers, originally from Vermont, explored the area around the Holland River and Lake Simcoe to a find a new location away from the violence in the US during the American Revolution.

By the end of 1801, Joseph Hill finished construction of a mill on the Holland River, which produced the pond known as Fairy Lake. Upper Yonge Street began to grow around the mill, which is why Newmarket's primary downtown area is centred on the Holland River and not on Yonge Street. A tannery was built north of the mill and businesses began to establish the following year.

The town continued to grow into the 19th century and a market in the downtown location eventually inspired the name "Newmarket." Officially incorporated as a village in 1857, it wasn't until 1880, when Newmarket has 2,000 residents, that it became a town. William Cane was the first mayor of Newmarket and opened a manufacturing plant in the town.

In 1853, the first train pulled into Newmarket from Toronto, running along the first railway in Upper Canada. The railway eventually ran all the way to Collingwood and is now known as the Newmarket subdivision of the CNR system, running north towards Bradford and south towards Toronto. in 1899, the Toronto and York Radial Railway operated along Yonge Street and ran into Newmarket's downtown area attracting day trippers to the market.

Eventually, due to increased car traffic and decreased train ridership, the Radial tracks were torn up in 1947. in 1912, after years of planning and construction, a canal system along the Holland System that was proposed for use as a commercial waterway to bypass rising railway prices was cancelled. The locks put in place are still visible today though they are mostly silted up. Newmarket primarily developed in the area between Yonge Street and Bayview Street for much of the 20th century.

By the 1950's, Newmarket grew rapidly as it experienced its first suburban building boom due to its proximity to the city. The population increased dramatically and by 1974 construction of the Upper Canada Mall started pulling the focal point of the town westward. In the 1980s a concentrated effort to save the historic downtown area was initiated after old downtown Newmarket had become run down.

The arrival of the Highway 404 reversed the movement eastward. Since then, Newmarket has grown considerably and the town has expanded.

The town of Newmarket offers a rich arts and culture scene. The town hosts over 80 events dedicated to maintaining the cultural integrity of Newmarket and adding to its vibrant history.

Residents of Newmarket get to participate in cultural and artistic programs. Newmarket is starting to make an impression on the Ontario film community, hosting the 3rd annual Multimedia Film Festival of York Region. The film festival celebrates the diversity of York region residents while contributing to important cultural education and entertainment.

If music is more up your alley, Newmarket holds a number activities centred around a love of music. Offering events like Music on the Move, Newmarket Fiddle Fest and Music in the Park, there is an activity for music lovers of any genre. Newmarket has a lot to offer art lovers, as regular art festivals are held, giving artists the opportunity to showcase their work. Culture is important to Newmarket. About 95 per cent of its community programming has cultural aspects.

Some great events to attend to get a taste of the world in Newmarket include the Around the World Multi-Cultural Tour, the annual Nin Os Kom Tin Aboriginal Festival at Fairy Lake Park, and the Nativity Pageant.

Newmarket offers a vibrant theatre community. The largest theatre in the town is the Newmarket Theatre which is home to various theatre groups including Visual and Performing Arts Newmarket and Marquee Theatrical Production. The Resurgence Theatre puts on classic plays from Shakespeare in the outdoors at Fairy Lake Park.