Set in the gorgeous rolling hills of the Oak Ridges Moraine, King City is the perfect escape to the country for those looking for real estate in a pretty rural setting.

King features a picturesque countryside, of which the rolling hills of the Oak Ridges Moraine are the most prominent visible geographical element.

King is also known for its prestigious horse farms and cattle farms.

Though King Township is predominantly rural, most of its residents are concentrated in the communities of King City, Nobleton, and Schomberg. The average price in King City  is $2,031,167 (As of December 2022). 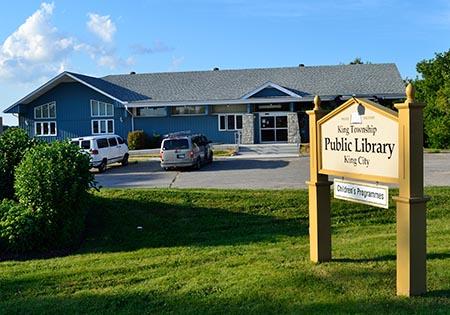 King Township is named for Major John King,an English Under-Secretary of State from 1794 to 1801 for the Home Department in the Portland administration. The township was created as part of the subdivision of York County, itself a subdivision of the Home District.

The lands were originally acquired by the British in an agreement with the Mississaugas, known as the Toronto Purchase; it was enacted in British parliament as the Toronto Purchase Act in 1787. Approximately 86,840 acres of land were administered by the township in 1878, according to the Historical Atlas of York County, but by 1973 this had been reduced to 82,000; some of its land has been ceded to what are now known as Newmarket, Aurora and Oak Ridges.

Lieutenant-Governor John Graves Simcoe planned Yonge Street, which was built between 1793 and 1796 by the Queen's Rangers. By 1801, Timothy Rogers, a Loyalist from Vermont, had travelled the road and found an area on its western boundary immediately southwest of Newmarket very appealing.

He applied for and received a grant for land totalling 40 farms, each of 200 acres, and subsequently returned to Vermont to recruit families to operate those farms. By February 1802, he had set out for King Township with the first group of settlers for those forty farms. A second group followed later that month.

The area would become known as Armitage, the first of King's settlements, and now part of Newmarket. Soon after the establishment of Armitage, the communities of Kettleby and Lloydtown were established to the west. More settlers arrived from New York, Pennsylvania, and other Loyalist enclaves over the subsequent years to populate the region, drawn by the abundant, fertile land being apportioned relatively cheaply to newcomers.

In 1851, the township annexed from West Gwillimbury the portion of land north of its extant and east of the Holland River as a result of the formation of Simcoe County.

The first survey of King Township, conducted in 1800 by Hessian soldier Johann Stegmann, indicated a population of twenty residents. By 1809, the population had increased sevenfold, to 160.

There is some evidence of a large Huron encampment at Hackett Lake. Residents in the area in the 1950s and 1960s would discover arrowheads and other archaeological items indicating a Huron presence. This is consistent with the fact that the Toronto Carrying-Place Trail, a major route used in the 17th and 18th centuries, passes through the township. The route was used by explorer Étienne Brûlé, who first travelled along the trail with twelve Huron guides in 1615.

Early settlements in the area developed primarily around gristmills and sawmills. These were important economic engines in the region during the 19th century, which resulted in the establishment of other communities and businesses nearby. Some settlements have since been abandoned, or are no longer communities per se, including Bell's Lake, Davis Corners, and King Ridge.

In 1971, with the formation of the Regional Municipality of York and dissolution of York County, the township's boundaries were changed, shifting west by one concession from Yonge Street to Bathurst Street, and north by one lot from the King-Vaughan town line.