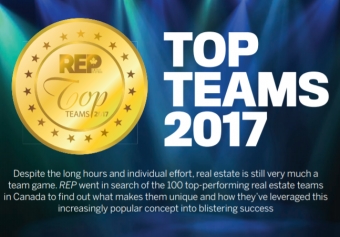 Reaching a point in your career where starting a team is necessary is a fine accomplishment, but turning that team into a successful entity is even more impressive. In the latest issue, REP highlights the top-performing real estate teams who have achieved their goals year in and year out—showcasing not only the vision and mentorship of their leaders but also the skill and commitment of the agents and support staff working to build the team’s brand.

“Not all teams are successful with some having trouble transitioning into leadership roles or motivating their team members,” said Clay Jarvis, REP journalist. “That’s why REP has dedicated this issue’s cover story to feature the teams who have managed to become an equally successful entity—and have accomplished great heights in the past year.”


The full report is available »here«